Translation History: Pym and his grievances

At the outset of his article, ‘On Toury’s laws of how translators translate’ (2008), Anthony Pym recounts to us in his “personal and dispensable prelude” the annoyance he felt as a result of a particular informal meeting with Gideon Toury. Pym was particularly irritated by Toury’s unwillingness to discuss his current work, the now seminal work, Descriptive Translation Studies and Beyond (1980, 2012). On this occasion, despite Pym’s irritation, I do not believe that we can blame Toury for avoiding the discussion of his professional life in such familiar circumstances. Indeed, I believe that we could all learn something from this! Pym continues to confess to us that “some of this frustration came out in my Method in Translation History” (1998, henceforth, MITH) which he was writing at the time.

Having discussed the principle themes of Pym’s article in Podcast#2 in our ProjectDart forum including those pertaining to risk-aversion, his aversion to Baker’s exploration of translation universals and his dissatisfaction with Toury’s theory of translation norms, it would perhaps be useful to review some of that frustration in this particular work.

Firstly, Pym’s MITH is critical of many of the well-established notions and approaches that have dominated in translation-related research since the early 1980s; norms and systems are two such bugbears, which, for Pym, are not entirely adequate for the study of translation history and, to some extent, synchronic translation study. His particular areas of dissatisfaction centre around four general principles; the issues of causation; the ‘human’ translator; neglecting to explore the inter-cultures inhabited by translators and the important role of translation history in order to contextualise the present. Although we will deal with each of these principles in turn, what is of interest here is how his theoretical and methodological frameworks outlined in this work conflict with those of Toury and, to some extent, Baker.

Firstly, we begin with ‘norms’ and ‘law’ posited by Toury. Evidently, there is no discussion of translation laws or universals in Pym’s work due to the fact that Toury, as we see in this article, was developing them at the time of writing MITH. However, I believe that the issues he raises in this article related to Toury’s laws are clearly visible in his own interpretation of translation norms. Pym, titles the section in his book where he deals with this subject area as “Norms?” (p. 115). Although he does not deny the existence of translation norms, he does question Toury’s conceptualisation of them. Although Pym is working within the realm of translation history, a separate strand in Translation Studies proper, his field shares many of the tenets of descriptive translation theories and methodologies including the emphasis on non-prescriptive  translation practice. Nonetheless, I feel that Pym believes that his reconceptualisation of norms should take in account new potentialities of the descriptive paradigm.

“a focus on change (norm-breaking, if you must) immediately raises questions about power and social tension, whereas a focus on non-change (norm-observance, if you like) invites assumptions of social unity and homogeneity”

Firstly, he insists that if norms are ‘constraints’ and we focus our attention on the effect this has on translation we often only look at stable ‘norms’ and not necessarily how norms progress, change, develop over time: “a focus on change (norm-breaking, if you must) immediately raises questions about power and social tension, whereas a focus on non-change (norm-observance, if you like) invites assumptions of social unity and homogeneity (MITH, p. 111). We might argue that Toury’s second law, the law of interference, partly deals with norm-breaking because anything that is transferred from the source text to the target text and, as a consequence, becomes salient to the target audience, is surely something that deviates from expected norms. However, Pym is critical of research in this area that generally seeks to observe stability rather than change. I would argue that with the advent of other allotochtonous theoretical and methodological paradigms borrowed from other disciplines such as Critical Discourse Analysis (e.g. Hatim and Mason, 1990) some of this lack of interest in change has been reversed as issues of power have become increasingly more developed. Nonetheless, I would agree that more diachronic study is required to truly understand the ways in which norm-adherence and norm-deviance.

Secondly, Pym is critical of approaches such as that of Baker, as highlighted in this article, wherein she attempts to adopt a scienfitic-linguistic approach to prove the existence of translation universals. In his article, Pym is overtly critical of Baker’s approach, which solely focuses on Toury’s first law of translation standardisation and neglects the inclusion of the second law concerning source text interference. Indeed, the descriptive studies paradigm is heavily target-text orientated and Baker has adopted this viewpoint both theoretically and methodologically. Concerning the latter, Baker has been heavily dependent on the use of corpus-related, comparative methodologies to study the difference between translated texts and non-translated texts to highlight the differences between such texts and perhaps, to prove the existence of her laws. In MITH, Pym adopts a different viewpoint wherein he deviates from the descriptive studies paradigm insisting that in order to study norms and insists that ignoring the source text and its associated culture is a fallacy. Pym believes that the study of norms should focus on translations but rather than studying non-translations we should study what is said about translations (p. 115). We could interpret this as paratextual or epitextual data as well as other institutional/political data such as style guides, market data or political policies: “translational norms can be discovered by looking at two kinds of material: primary texts (in this case translations), to see what translators have actually done, and secondary (theoretical or critical) statements about what translators should be doing, what they want to do , or what they want o be seen to be doing” (p. 111). By adopting such an approach that focuses on the progress of change within the realm of norms, Pym believes that our understanding of norms in the present can be better understood: “one way or another, what was important in the past must have some connection with what is important in the present; it must extend our frames of reference and our range of conceivable alternatives” (p.112).

Thirdly, Pym’s deviance from the target-orientated, descriptive studies paradigm is further emphasised by his instance that translation norms, in particular, should not be considered culture specific despite this being something which is often assumed. A source, produced within a set of particular cultural norms by an author, is mediated by a translator who exists within the target context and creates a target text that is shaped by norms in the target culture. Pym turns this well established paradigm on its head insisting that we should see translators as inhabiting an inter-culture in which they share two sets of norms and it is more effective to understand the nature of these norms if they are studied over time. In this paradigm, the inter-culture and the translator that inhabits it is the unit of analysis rather than the translation. By examining the translation process in this way, Pym believes that we can explore the true nature of the norms affecting the translator.

These three critical points are those which Pym sees as challenging Toury’s conceptualisation of norms and it is clear that they all have possess a very specific commonality: that is, the recognition that translation is a very human endeavour. Pym believes that it is the translator (the human) that should be explored in terms of the context in which they exist in order to understand how this affects their behaviours and, more importantly, to see how these behaviours change over time. Pym is equally critical of systems theory such as that proposed by Even-Zohar and his polysystems theory. Pym sees systems theory as a “subjectless prose” which focuses on the system rather than the people in the system enacting the norms that exist within it. Perhaps Pym’s risk-aversion as an antidote to the problems inherent with the laws/universals of translation is his attempt to demonstrate how we should be putting translators and their inter-culture at the centre our of our analysis as well as exploring this unit of analysis diachronically in order to properly see if their are systematic universals or laws that operate in translation. MITH offers ‘regime theory’ (first used by John Reggie in 1975 in international politics) as an alternative to systems theory and perhaps to our current understanding of laws and universals in translation. Regime theory is defined as “sets of implicit or explicit principles, norms, rules and decision-making procedures around which actors’ expectations converge in a given area of international relations”. What Pym is showing us here is that ‘norms’ are only one part of the story and, in fact, if we really want to understand what is universal about translation then there are more macro- and micro-levels of contextual analysis that need to be considered. Risk-aversion is Pym’s initial attempt at helping us unify not only the laws of translation but also the inherent connections that exist between them and the context in which they occur. 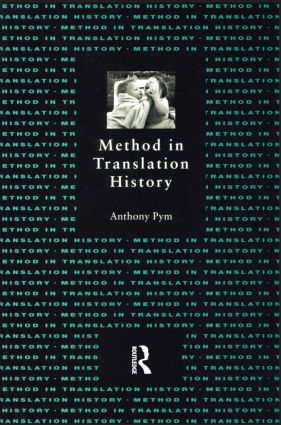 Anthony Pym’s Method in Translation History (1998) is published by Routledge.